Architecture is first a concept and only then a building. The architectural draft might even be able to show more about the acquired theory and expertise of its designer since the realized constructions are oftentimes characterized by many restrictions, changes and compromises. When examining the 19th and 20th centuries, scholarly research predominantly focuses on profane building tasks although ecclesiastical architecture still plays a significant role. Especially the divergent developments in terms of aesthetic and construction of church architecture from the 18th to the 21st century may be well observed in unrealized competition designs and model-like concepts ranging to utopia. The architectural designs thus provide information about the profound architectural theory of an epoch. They embody more clearly than the building stock an idealization of space and significantly condense discourses around processes of change. Concepts, sketches, plans and models should consequently be valued as a crucial compendium in the study of modern and contemporary sacred buildings. Their scientific importance should be more clearly communicated since they can be considered as unexplored spaces, both in terms of building practice and science.

Designs of houses of worship are handed down in many different ways such as drawings, plans or model buildings. Through them, competitions and project discourses experienced their first heyday in the Renaissance. In the late 18th century, architects such as Ledoux or Boullée devoted special attention to the architectural utopia in their visionary drawings, in particular to sacred connotations. In the 19th century, competitions became an indispensable part of communication about new church planning. They proved to be an effective way of balancing national artistic aspirations with local feasibility. The drawings and concepts were distinctively valued as creative works and as such purchased and exhibited both locally and nationally. Newly founded competition journals enabled discussions about progressive designs in broader circles. Pluralistic realignments in both the church and its theologies enabled a re-conceptualization of the building task CHURCH in the 20th century, both architecturally and sociologically. In terms of architectural design, it was necessary to find new definitions for various roles of the church architecture:
a) in urban topography
b) in its socio-cultural significance for the parish and pastoral care
c) in a changing liturgy.

Well studied is the multitude of model churches that emerged from these changes in interwar times: churches that reflected and visualized the discourse on space and liturgy in an accompanying manner which nonetheless must not be misunderstood as building concepts.
However, there is a research deficit for the period after 1945. Considering the huge number of churches built in the post-war era, the stock of ideas, competitions and unrealized buildings has never been systematically investigated. In the 21st century the situation again changed into an excess demand. Public calls for ideas become common. Feasibility studies and 3D-visualizations now assert themselves as significant forms of communication in new media channels.

The conference is planned to be accompanied by an exhibition with a regional focus on the fantastic designs by Karl Friedrich Schinkel, competition entries of the imperial era such as the Berlin Cathedral, up to church building designs of the post-war period and present days.

Interested parties are invited to submit a one-page abstract (PDF) on the above or related topics for a 30-minute presentation (plus short debate) including a brief CV by October 31, 2022 to: Manthey@katholische-akademie-berlin.de. It is planned to publish the lectures in a book series of the Berliner Kirchenbauforum. 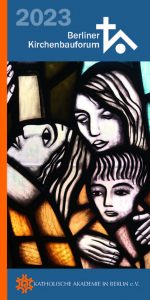